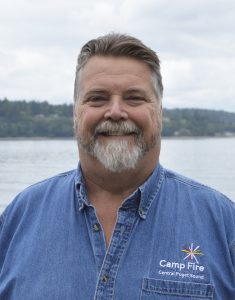 Rick Taylor Appointed to the National Camp Fire Board of Trustees

Congratulations to our Executive Director, Rick Taylor, for being appointed to Camp Fire’s National Board of Trustees! Rick was recruited in part due to Central Puget Sound’s reputation as one of the leading Camp Fire Councils in the nation.  During his 3 year term, Rick will be representing 61 Camp Fire Councils from across the country including our very own! Members of Camp Fire’s National Board display executive experience and expertise, innovation and action and commitment to America’s youth.

Rick brings more than 25 years worth of experience that he has gained while directing camps all across the country. He joined Camp Fire in 2007 as the Director of Camping and Outdoor Education and has been our Executive Director since 2012. Rick believes that Camp Fire’s commitment to inclusivity and empowering youth in small group settings is what makes it such a great organization to be a part of.

He and his wife have three grown children and live at Camp Sealth with their dog, Dobby!

Interested in becoming a Camp Fire board member? Learn more.

Stay caught up on all things Camp Fire by subscribing to our e-newsletter!