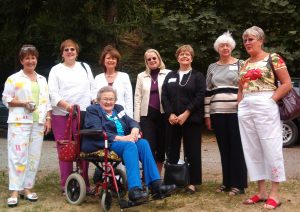 Janet Hunter’s mother was a Camp Fire girl, beginning a legacy that included her daughter and granddaughter and many other women who remain friends decades later. This remarkable loyalty has fueled deep and lasting relationships and lifetimes of memories — along with a generous gift to commemorate it all.

Eleanor Bird Green, who led daughter Janet’s BOHOPI (Bothell-Horizon-Pioneer) group that started in the 1950s, would have been 100 years old at the end of this year. Her legacy continues to be celebrated by Janet and other BOHOPI alumni who are still fast friends today.

“Mom had been a Camp Fire girl in the 1920s and had gone to Camp Sealth. Her father had been on work crews with the Kiwanis Club to help build Rounds Hall at the camp,” Janet says. “Her Camp Fire friends stayed with her into adult life and she wanted the same for me and my friends. She knew that Camp Fire instilled strong values that would last forever.”

Janet and her BOHOPI friends will come together to celebrate Eleanor’s 100th birthday in December. The Hunter family is paying forward her mother’s influence by establishing a fund to support Camp Sealth and making a generous $100,000 gift this year. On behalf of all Camp Fire participants, thank you!

Making a Tribute Gift is a Wonderful way to Honor a Loved One:

Join Janet, shown here with her parents, and make a donation to Camp Fire today!

Read more articles from the Spring 2017 edition of the Torch: