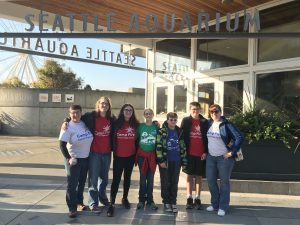 The Robot Camperz enjoying a day at the Seattle Aquarium.

The Robot Camperz are a co-ed Camp Fire group that has been participating in the Candy Sale for years. Now in middle school, they’re even more exited and enthusiastic about the Candy Sale. This year we got to talk with their group leader, Shannon McMaster, who was kind enough to share some of their experiences!

The Robot Camperz and Candy Salez

How They Got Involved:

“We started with camp fire 6 years ago when my youngest was in Kindergarten and my older one was in 2nd grade- we had a group of families who wanted to join something like Boy or Girl scouts, but we had both boys and girls so wanted it to be co-ed.”

Being In a Co-Ed Group:

“Being co-ed is great–we do a variety of projects and activities and all the kids really enjoy everything we do.  It helps in the decision making process having a variety of perspectives, and I think the kids try things they normally wouldn’t do if they were in a group of their same-sex peers.”

What the Candy Sale Means to the Robot Camperz:

“We’ve done candy sales every year- the first year we were super nervous about it.  No one really wanted to do it, but the benefits of the sale were really great.  It’s not as hard as you’d think, and it was an amazing way for our kids to learn about communicating with people.  My 12 year old is very quiet, but during candy sale time he has no problem approaching people and talking to them.  It’s really been amazing to see.  As for the financial part, it hasn’t been a huge factor as we’re very fortunate that we do a lot of activities that cost little or no money; but our best selling year the kids did get to rent a limo and it was so cool that they were able to recognize they had that opportunity solely because of their hard work.”

How Candy Sales Have Helped Their Group:

“It definitely has helped a few of the kids set and reach goals we wouldn’t have thought possible.  There have been two separate years where two different kids have wanted to meet the 350 goal because of the stuffed animal. The kids have also been really sweet about sharing their sales when one kid is short and trying to make a goal.”

I think the candy selling experience has given them a lot of opportunity to meet new people, practice public speaking skills and learn about money management in a way that makes sense to them.

Your support during the Candy Sale helps bring more programming to groups like the Robot Camperz!